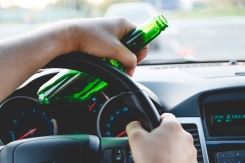 The state of Georgia has continuously made changes to laws in order to reduce the prevalence of motorists who drive under the influence (DUI) of drugs or alcohol. While many of these notable changes have come in the form of harsher criminal penalties for those convicted of various DUI offenses, there are also several other DUI statutes, including Georgia's open container law.

According to § 40-5-253 of the Official Code of Georgia Annotated (OCGA), it is illegal for anyone to possess or consume an open alcoholic beverage container in the passenger area of a motor vehicle on a roadway or shoulder.

As defined by the statue, an open alcoholic beverage container is any bottle, can, or receptacle that contains any amount of alcohol and:

Passenger area generally refers to any area inside a motor vehicle where a driver or passenger would sit while the vehicle is in operation. Locked glove compartments and trunks are not considered part of the passenger area. When law enforcement officers encounter this situation, only the person who consumed alcohol or was in possession of an open container will be charged. If a driver is alone, the open container will be deemed to be in their possession. Georgia's open container law does not apply to vehicles used primarily for the transportation of persons for compensation or in the living quarters of a motor home. Typically, open container violations are treated similarly to traffic infractions and are punishable by a fine of up to $200.

In the context of DUI charges, law enforcement officers who discover open or partially consumed alcohol beverage containers during an arrest may find cause to record this evidence for use during a criminal case or driver's license administrative hearing, as well as ticket the driver for an additional violation. Particularly in cases involving DUI accidents or multiple DUI's, open containers can be viewed as an aggravating circumstance and grounds for heightened penalties.

If you would like more information about Georgia's open container law and how it may impact a DUI case, or if you would like to discuss your case with an Atlanta DUI attorneys from the Law Offices of Howard J. Weintraub, contact our firm today.